What Is The Sailing Vessel, “SV Delos”?

The name has been popping up on the web for the past few months. Every day there are more and more posts, shares, and comments referencing it. But for those who haven’t experienced it yet themselves, it’s somewhat of a mystery. Following is a closer look at the sailing vessel, the SV Delos, and what exactly it stands for.

You may have figured out as much by now, but the SV Delos is a boat. To be more specific, she is an Amel Super Maramu that stretches for a total of 53 feet. But she is a lot more than just a boat. She is a home to a few people as well as the realization of a lifelong dream. Even the name itself has a hidden meaning.

Some of you may be familiar with the story of the island of Delos.

It was a mythical location near the coast of Greece. 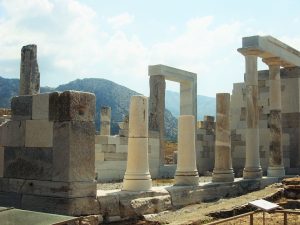 The myth goes that Zeus cheated on his wife and had two children that were half human and half god. The wife of Zeus forbid the children to be born on land. Poseidon instead raised earth from his underwater kingdom and created a floating oasis for the children.

Much like the mythical Delos, the SV Delos is a floating oasis and home for its inhabitants.

The ship has a lot of amazing features. For example, it converts salt water to regular water. It also uses solar panels to convert sunlight into energy. Overall, it is a self-sufficiently and completely independent place of residence. The ship rarely has to visit docks to be resupplied or maintained.

Today, this boat travels across the globe from one sea to the next.

It has seen more than 100,000 nautical miles and doesn’t show any signs of slowing down.

Perhaps one-day others will follow a similar dream and the Delos won’t be alone in the ocean.

It ‘s a friendly story about a mates sailing,travel and adventures.